Railway Upgrades Local Passenger Service
With scores of university students heading home to Carleton County this weekend, the railway has added a new steam generator unit (a refurbished F7B) for use on the daily Fiddlehead local passenger train. The photo below shows the unit stopped at the Nortondale station during a recent test run. Although the weather is getting warmer, the nights are still chilly and the steam unit will assure a cosy ride for students heading home. 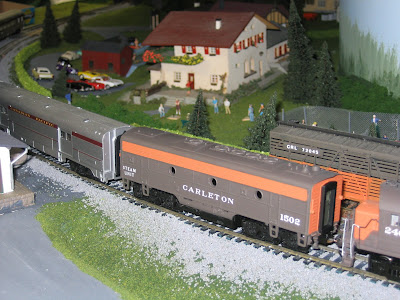 I picked up the inexpensive Athearn dummy at the train show in Sanford, Maine last week. A steam generator unit will provide more flexibility as I assign locomotives for the passenger trains.

Carleton Railway management has been increasingly concerned about competition from other New Brunswick (model) railways. The railway recently decided to begin competing more aggressively with the ICR, but this week management noticed that a Fundy Northern Railway boxcar had been delivered to the Green Cross dealer in Wakefield.

Meanwhile, management just returned from a railway meeting in Sanford, Maine with prospects that the new Monticello yard will result in considerable interchange traffic for the Carleton Railway. 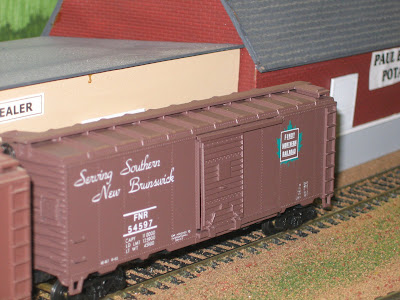 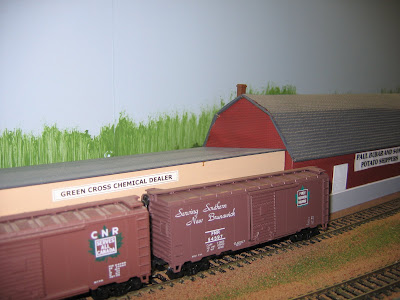 (Translation: On the way home from Boston this week, I stopped at the Model Train show in Sanford, Maine and bought a number of BAR freight cars for use on the Monticello modules. I also found a used FNR boxcar on the bargains table!)

The Arrival of Spring

From the cool waters rushing under the bridge in Nortondale to the carloads of beef cattle arriving at the BQM packing plant after the "spring show and sale," it is obvious that the long winter has finally come to a close. Not only is one of York County's most famous artists in his shirtsleeves while being inspired to put brush to canvass by the scenic valley of the Nackawic Stream, but the heated swimming pool at Nortondale's luxurious resort is attracting the rich and famous from near and far. Spring really is here (click on photos to enlarge): 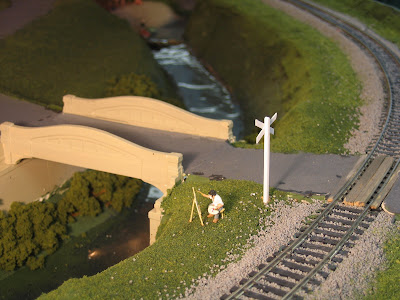 All the artist needs to make the day even more inspiring is to feel the vibration of a train approaching along the Carleton Railway's mainline. 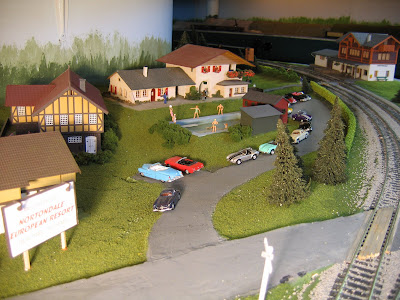 A parking lot filled with Cadillacs, Porsches, Shelbys, and Jaguars suggests something about the class status of the guests at the posh resort. Of course, the guests from the Boston area who seek the ultimate in luxury arrive at the resort not by car but via the Carleton Railway's daily Nor'easter limited. 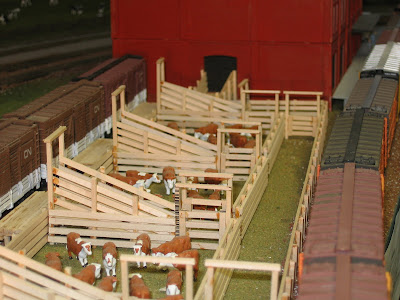 Some of these healthy-looking beef cattle may think they have found their own resort vacation as they feast on last summer's hay while awaiting their turn to enter the BQM packing plant. Alas, the catttle seem not to exit the building in the same condition as when they entered. The BQM plant is the single busiest generator of railway traffic on the layout. Every day, numerous stock cars and reefers are spotted at the plant (along with boxcars of supplies and occasional tank cars of fuel or chemicals). In the above photo, several stock cars (left) have just unloaded, while a long string of meat reefers (right) is being loaded for shipment. Barbeque season will soon be here!