Railfans were pleasantly surprised this week to see a very short passenger train stop briefly at the Avondale station on the way to the Carleton Railway's car shops in Nortondale, York County.  The eastbound extra train consisted of Alco C-420 #2010 pulling a pair of shiny dome cars that had recently been purchased in Tatamagouche.  Once the cars have been re-lettered for the Carleton Railway and upgraded to the railway's exacting standards for quality service, the cars should enter regular service by fall (click on the photo to enlarge it). 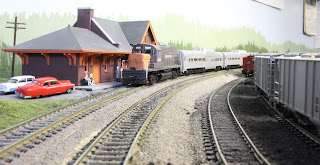 It is a busy day in the Avondale yard.  Those covered hoppers on track 5 are part of the westbound Newbridge Turn that has just arrived from South Newbridge, and the caboose that is almost out of sight on track 6 is at the rear of the Aroostook Local leaving for Monticello, Maine.
Posted by Steve Mc at 6:22 AM No comments:

I just returned from a wonderful weekend at the annual convention of the Maritime Federation of Model Railroaders.  It was an exceptional convention.  Steve O'Brien, George Sabean, and I took a 16-module display to represent our local Saint John club (SJSMR) and, as usual, the Carleton Railway's six "Monticello, Maine" modules were part of the public show on Saturday at the Recreation Centre in Tatamagouche.  With some much appreciated help from Mitchell, we kept the trains running all day and talked to a lot of interested people (click on the photos to enlarge them): 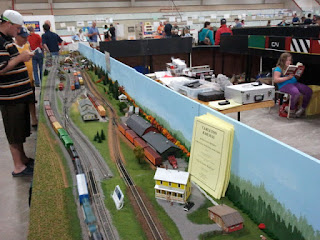 Alco switcher 1023 kept very busy in the Monticello yard as train after train passed by on the double-track mainline.  Lots of people took copies of the latest railway timetable. 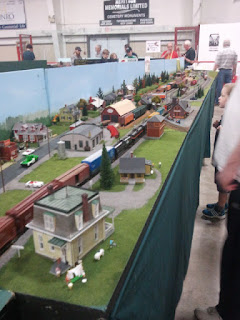 The public show was well attended and featured a large number of layouts and several dealers.  The photo below is a mid-morning view of the crowd in the arena.  The show was busy all morning and afternoon. 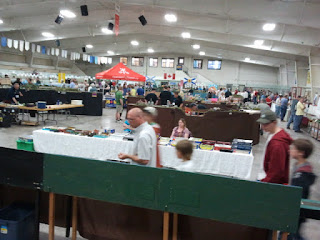 The high point of the convention for me was the tour of Dave Gunn's railway.  The scratch-built structures were incredible--some complete with detailed interiors and lighting.  The large industrial buildings were very impressive.  I have included a few shots of some of the highlights of the layout (the photos were from my cell phone; I wish I had taken my digital camera to get some better close-ups of the fine detail): 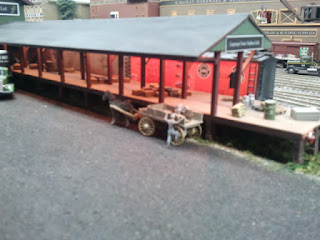 The above photo shows the fruit and vegetable terminal.  Below is a huge furniture manufacturing complex. 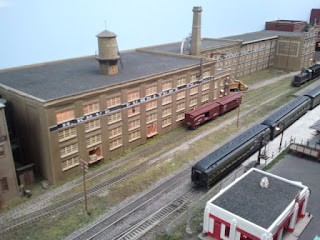 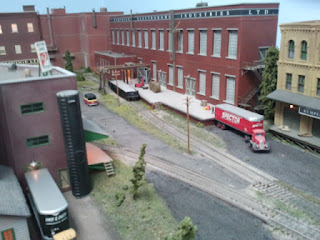 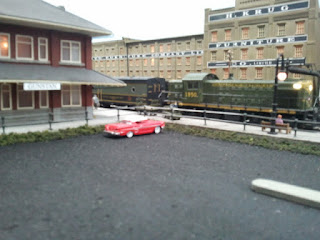 The Sherwin-Williams plant takes up most of one wall of the layout room. 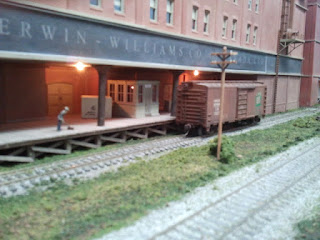 There are switch levers inside the lighted interlocking tower below. 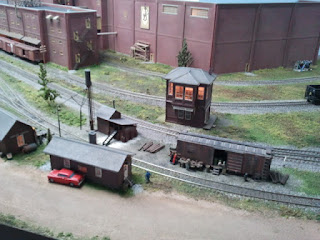 It was a great convention!  Sincere appreciation is expressed to those who did such a fine job of organizing everything and welcoming us so well.