Not Everyone Is in Springfield...

Although many regular crew members have headed to the Big Train Show this weekend (and the rival ICR even cancelled its scheduled op session), the ever-reliable Carleton Railway faithfully continued to deliver freight to its valued customers this evening.  In the photo below, Bruce Bosence serves as both engineer and conductor of the westbound leg of the Newbridge Turn in Waterville, where work consisted of moving a number of "off spot" freight cars (including a loaded stock car) to their intended destinations at the BQM plant.  During the last op session, the Newbridge Turn only got as far as Pembroke before the session ended; during this evening's "mini op session," the train completed its run.  Yard switching was also carried out at both South Newbridge and Avondale, readying the railway for the next scheduled op session on Friday evening, Feb. 22. 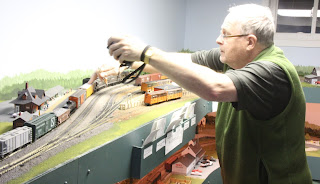 The Carleton Railway's first operating session of 2013 drew a crew of eleven skilful operators who efficiently delivered freight and passengers in keeping with Timetable #7 which went into effect on January 1.   The eighteen-hour session (3 actual hours with a 6:1 fast clock) flew by as 14 scheduled and 2 extra trains traversed the system.  Although there were a few delays, the crew did a great job.  A three-way meet (two limited-stop passenger trains and a local freight) at Waterville was accomplished without a hitch.

Buckingham Quality Meats, the major employer in Waterville, received five car loads of beef cattle and two car loads of hogs.  Extra 2010 (engineer Lawrence) switched the yard and spotted stock cars, along with a string of reefers that will deliver processed meat to waiting wholesalers.  Later in the day, the Valley Local (operated by Wendell, with some "help" from Doug) delivered additional stock cars to the plant: 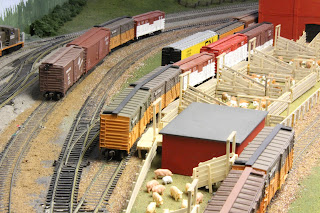 The railway realizes that BQM has other options for shipping their products, including their own fleet of trucks.  The Carleton Railway considers BQM meat shipments to be a top priority and moves them daily to customers on fast freights # 21 and #22 (both trains were crewed by Blake). 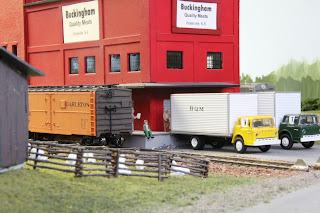 The potato industry is also very important to the railway.  This decrepit-looking truck, used only around the farm, is loaded with potato barrels.

The railway takes care to keep its stock cars in clean working order.  After being unloaded at the BQM plant, the cars move to the clean-out facility. 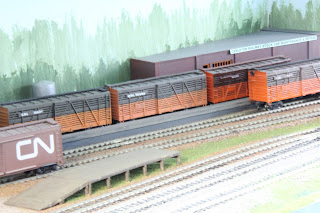 Even small facilities like this hog pen in Nortondale are switched by attentive railway crews. 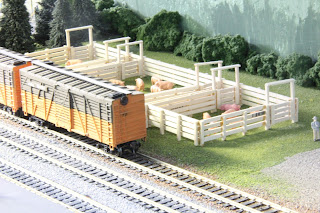 Although agriculture provides the bulk of Carleton Railway freight, the lumber industry is also important.  The Northampton Local, with Lou and Barry as engineer and conductor, delivered several loads of logs to Patterson's Mill and spotted a variety of cars at nearby industries: 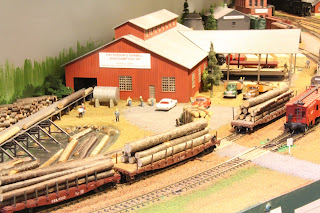 In the South Newbridge yard (Jct. with the Northampton and Newbridge Subdivisions), Yardmaster Peter used an Alco switcher recently acquired from CN and not yet repainted. 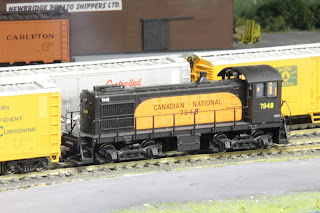 Bruce and Roy served as Yardmaster and Assistant Yardmaster in the big Avondale Yard, staying well ahead of schedule throughout the busy session.  The old H16-44 switcher (lettered for the wholly-owned Avondale Terminal Railway) was assisted by an Alco S-4.

In addition to the freight trains, six passenger trains made their way across the system, with Doug, Mike, and Blake at the throttles.  One other interesting event was the inaugural run of locomotives 2801 and 2802, the railway's new Alco C428s, serving as power for the Carleton-York Peddler.