Geeps on the Carleton Railway??

As plans continue for the Carleton Railway's new yard in Monticello, management is considering ways to provide the necessary motive power to meet the needs of the growing railway while also meeting the DC electrical requirements for interfacing the Monticello modules with the Saint John club's other modules. Management has recently taken three long-idle GP-7's (#1752, #1756, #1759) out of retirment as consideration is given to putting them back in service on the Aroostook subdivision. It looks like they will need some clean-up work after sitting on the shelf for 11 years. 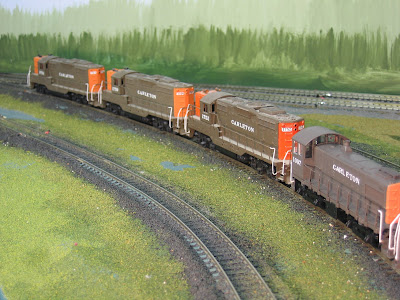 Actually, the now 25+ year-old GP7 units may simply serve as background scenery on the new modules. They have a long and distinguished history on the Carleton Railway, having been the railway's main motive power on the 9' x 16' layout located in our basement in Waterville (1980-1988). During our nine years in Woodstock (1988-1997), two of the GP7's served as yard switchers (the layout was contemporary, so GP7's were no longer used on the mainline) and the third unit was donated to the Rosedale railway museum for static display (next to the Rosedale Station which had become the museum). The Woodstock layout was predominently powered by SD40-2's and GP38-2's. How things changed when I backdated the layout to 1965 and the EMD units all disappeared from the railway in favour of Alco and F-M units.
Posted by Steve Mc at 8:48 AM 3 comments: 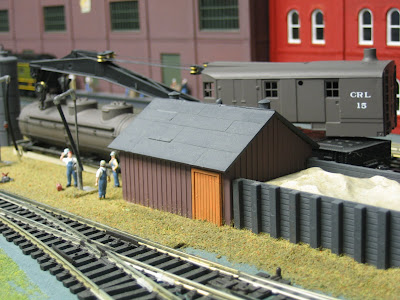 The railway`s 200-ton crane had just lowered the new fuel tank (a retired railway tank car) into its permanent position on blocks in the Avondale yard. Meanwhile, maintenance crew members inspect a broken hose on a nearby water line. 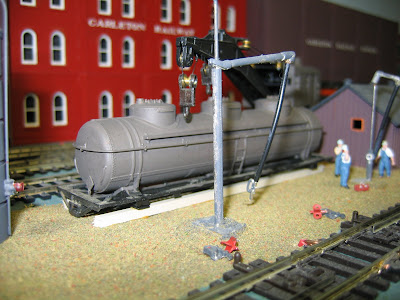 The new fuel tank will soon be filled and ready to assure an ample and uninterrupted fuel supply for Carleton Railway locomotives.

The ICR on the CRL 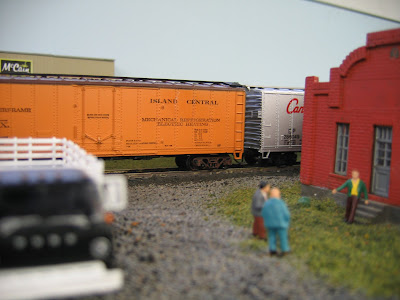 An ICR mechanical reefer has just been unloaded at the White Road Produce warehouse in Avondale and wil soon be routed back to Saint John as an empty. 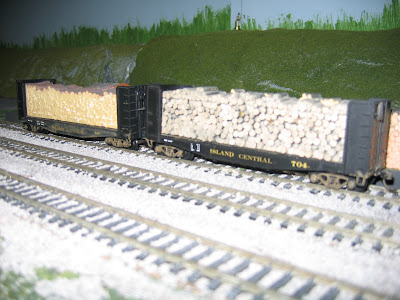 Two ICR pulpwood flatcars have just been loaded in East Newbridge and will head for the Irving mill on the next eastbound train.

2008 Carleton Railway Generates Revenue on the ICR
(click on photos to enlarge)
Not content to depend on past performance, the progressive and hard-working management of the Carleton Railway (ca. 2008) continues a long tradition of pursuing new opportunities to increase revenue and ensure customer satisfaction. Management has been especially interested in generating business in the Saint John area amid the talk of several new industrial projects in the works in the port city. The latest operating session on the ICR illustrated the success of management's latest initiatives. 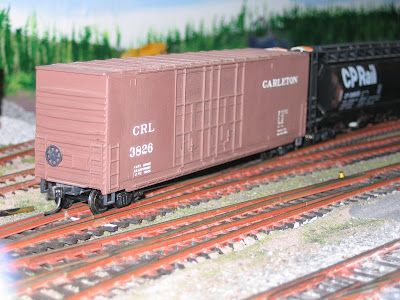 Seen above is CRL box #3826 in the ICR's McAdam yard. It will soon head onto the Shogomoc subdivision on its way back to Avondale for another load. 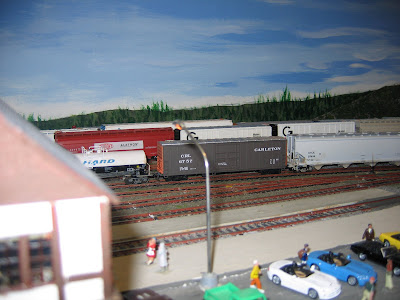 Another CRL freight car, #6757, arrives in McAdam with a load destined for Saint John. 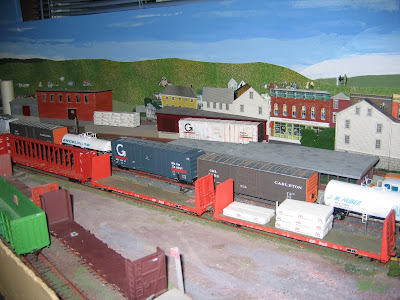 Another loaded car #6758 passes through Fredericton Jct. on the ICR fast freight with a priority shipment for one of the railway's new customers in Saint John. 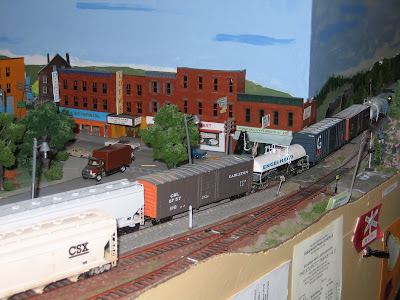 A shot of the same ICR train (including CRL #6757) on the main in Grand Bay. It was about this time that ICR management began to realize that there had been an invasion of several CRL freight cars on the ICR. Some concerns were expressed about the syphoning of traffic from the ICR. 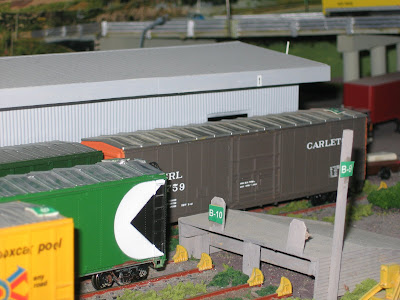 CRL car #6759 at its destination in the ICR's Mill Street yard. Carleton Railway management sent an agent (with camera) to observe the delivery of the freight cars and provide the necessary 'research' to enable the Carleton Railway to make prudent decisions about future shipments. Although there was a considerable delay in the scheduled departure of the ICR's fast freight from McAdam, as well as a recurring mechanical problem along the way, the ICR train arrived in Saint John in time for the promised "next day delivery" for the Carleton Railway's new customer. The CRL's friendly management will carefully consider the results of this first opportunity to use the ICR as a major connection to Saint John. Of course, it remains to be seen how ICR management will respond to this increased competition for business. 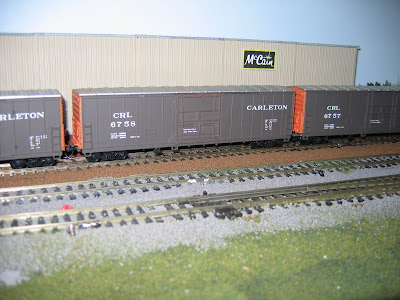 Although the era of the Carleton Railway is 1965, management decided it would be good to see if the success of the railway will continue into the future. They engaged the services of a photographer who claimed to have a time machine and requested information about the fate of the railway in some distant future time -- say -- 2008. The result was this unusual photograph from the future, showing a string of well-maintained modern CRL 50' freight cars being loaded at the busy McCain plant in Avondale in 2008. Railway management is relieved and pleased to know that the railway will not only survive but will prosper in the competitive transportation market of the future (however management is concerned to notice that there are no roof walks on the freight cars. Will such a thing be allowed in "the future"?). The photographer has not yet provided additional details about the future of the railway. Stay tuned...
Posted by Steve Mc at 3:44 PM 2 comments: 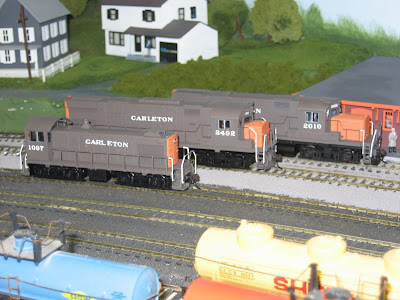 Three new Alco units pose next to the Avondale station
With the expectation that good economic times are ahead, the Carleton Railway recently added three new Alco units to the roster. The 2000 hp C420 #2010 (the railway's first C420 unit) with its distinctive Alco sound has already entered regular service on the main line but management anticipates that in the near future it may find more consistent duty as business expands on the Northampton subdivision. C424 #2492 will be based in the Aroostook County town of Monticello where the railway is in the process of constructing a major classification yard for marshalling potato and lumber traffic. The reconditioned 1000-hp S4 #1097 will also be assigned to Monticello where it will be kept busy in the yard. The railway currently has six additional C424's in service, along with 2 S4 locos that are assigned to the Avondale and South Newbridge yards.
Over the next year, the Monticello yard will be contructed on four modules that will be added to the Saint John club's modular layout. The modules have been assembled and are awaiting track and scenery. Several adjoining club modules (Blake, Bob H., and Bob K.) also represent railroading in Aroostook County; joined together they should provide lots of operating possibilities. Unlike the rest of the railway's roster of locomotives, the S4 and the C424 will remain as DC units for use on the club modules (unless the club converts to DCC).
Posted by Steve Mc at 5:17 PM 4 comments:

For the second weekend in a row, the Carleton Railway was operated by a crew of extra-provincial visitors. Following today's annual Saint John train show, a crew of five Nova Scotians along with the ICR's Doug Devine provided the expertise and labour to run a full operating session. Undeterred by the blizzard outside, the dedicated and enthusaistic crew skillfully operated the railway. Although unfamiliar with the layout, the crew did a fine job of acquainting themselves with the car forwarding system.

Being the first full day of the March break, there was considerably more passenger traffic than usual so the Carleton Railway added extra cars to its passenger trains to accommodate the Carleton County students who were travelling home for the week. There was a near disaster when the crew of #12 (the Nor'Easter--under the control of Doug D.) nearly ran head-on into #15 (the Fiddlehead) near Pembroke. An investigation led to the conclusion that the crew of one of the aforementioned trains neglected to read their train orders. However, a "near miss" is a miss, and no repercussions are expected.

With the expectation of warmer weather soon, the boys working in the Carleton County woods have been busy moving lots of pulpwood out to the siding in East Newbridge. South Newbridge yardmaster Ron was busy adding loaded pulpwood cars to both eastward and westward trains.

All in all it was an excellent operating session. Thanks Bruce, Doug W., Ray, Ron, Don, and Doug D. 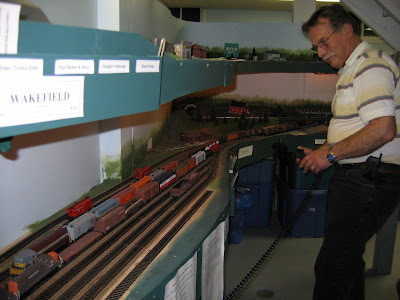 As Ray concludes the run of the Carleton-York peddler, he switches cars in the Millville yard. 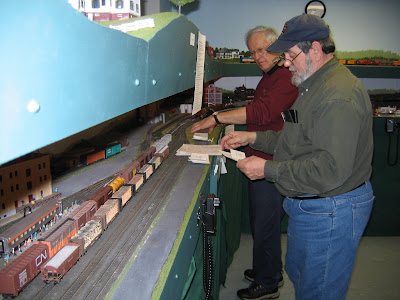 Don consults with South Newbridge yardmaster Ron as he prepares to take the Newbridge turn back to Avondale. 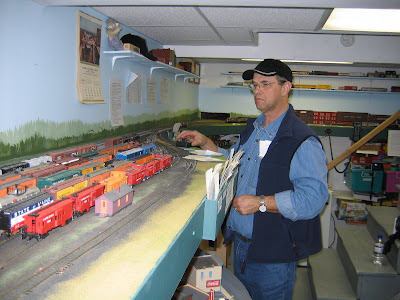