Five crew members from Prince Edward Island joined a few regulars for a special Saturday afternoon operating session on the Carleton Railway.  Thanks to Scott, Ed, Barry, Kenny, and Steve for a great afternoon.  Below, Ed takes the lead in Avondale yard as Bruce serves as Assistant Yardmaster. 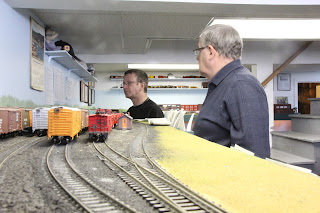 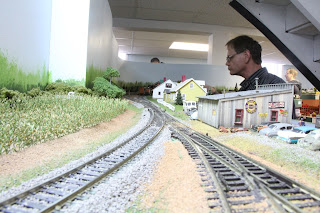 Steve is moving the Newbridge Turn onto the main line on the upper level while Barry, assisted by Lou, serves as yardmaster in South Newbridge. 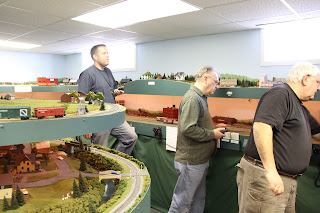 Kenny is assisted by Barry as the Northampton Local East does some switching in Grafton. 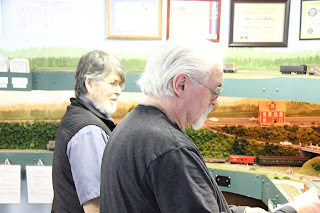 The next op session is tentatively scheduled for April 5.
Posted by Steve Mc at 2:38 PM No comments:

Big Alcos on the branch line?

The Carleton Railway was very busy on Friday evening with 12 crew members joining me to run 14 scheduled trains as well as an extra.  Below, George is looking very serious as he checks the waybills while Norm does some railfanning as the Capital City Commuter makes its way through Wakefield on its way toward Fredericton. 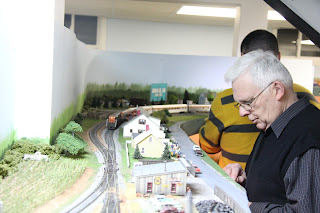 Avondale yard was an effiicient spot with Bruce and Wendell (below) keeping everything running smoothly. 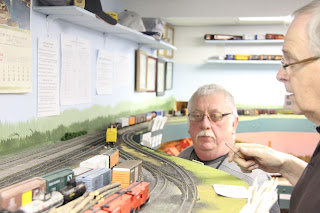 Bob Kane oversaw a very busy evening in the South Newbridge yard.  In the photo below, he spots some reefers at the potato sheds. 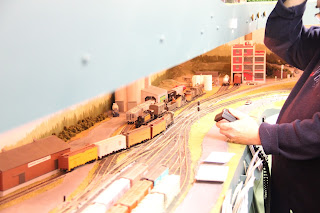 While Barry and Randy were busy with freight trains, Lawrence had an unusual amount of work in the Waterville yard. 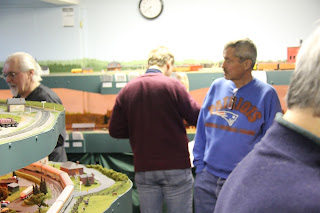 The most unusual sight of the evening was on the Northampton branch.  Two huge locos, Alco C628s, were spotted by railfans on the branch line near the tiny Mulheron Street station.  Never before have such powerful (and heavy) locomotives ventured onto the line toward Northampton.  Since such locomotives were not scheduled or expected on the branch line, an investigation was carried out by management.  It seems that the innovative crew of the Valley Local decided while doing some yard switching in South Newbridge to use the branch line instead of the yard lead. An inspection of the tracks for damage will be carried out before the next operating session.

This weekend is a busy one for the railway.  On Saturday, a visiting crew from Prince Edward Island is scheduled to operate the railway.