Here is a very brief update regarding the Carleton Railway's Monticello, Maine freight yard / BAR interchange modules that I have begun constructing. The first photo shows the wiring crew making sure that everything works well electrically. The overview of the four modules in the lower photo shows the track ballasted and some basic ground cover installed. I still have a week to get the module ready to be part of the SJSMRR modular layout. I hope to add a few more scenic details, and I will also install the backdrops. Obviously I will still have lots of work to do in the coming year to make it look complete for the fall 2009 show, but at least it will be in place and operational for this year's show. 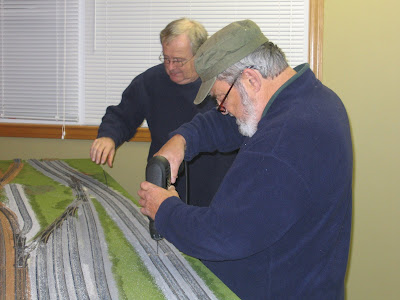 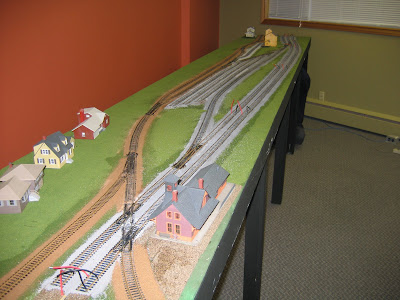 Bob Kane and Bruce Bosence have helped immensely with the project, as did Lou McIntyre earlier in the year. Thanks guys!

The first track has been laid for the Carleton Railway's Aroostook Subdivision, which has to this point existed only as staging in the basement furnace room. With help from Bob Kane and Bruce Bosence, all of the track has been laid on the four modules that will represent the interchange betwen the Carleton Railway (double-track mainline at the front) and the BAR (single track mainline at the rear that crosses the CR mainline in the foreground) in Monticello, Maine. The Carleton Railway will provide a yard crew (an S-4) that will be kept busy with industrial switching and interchange trafic. A small yard between the two railways should provide ample space for sorting freight cars and making up trains. 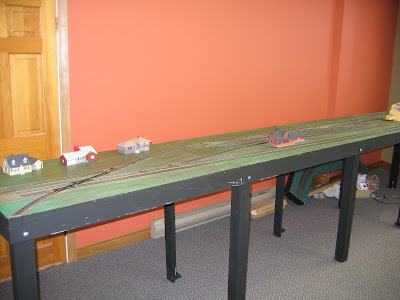 The various tracks can be seen more clearly in the view below; the yard lead is at the far end (just inside the double track mainline). The BAR mainline is located so it can connect at the far end with Blake Wooley's BAR modules at Presque Isle (hurry up and get those done, Blake!), and then Blake's modules will connect to Bob Henry's Aroostook Valley Railway at Caribou, which then connects to Bob Kane's Aroostook River Railway at Washburn Jct. All together, the modules will provide an operating Aroostook County layout that will be more than 40 feet long; the two tracks in the foreground can operate independently of the rest of the modules, so at SJSMRR shows the Aroostook County modules can be operated in a prototypical manner without interfering with the trains that are traversing the mainline. 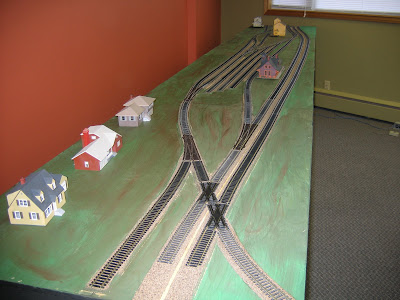 An additional inner track at the southern end is available in case someone wants to entend the operations-oriented modules (anyone want to model Houlton, Maine?).

The SJSMRR Fall Show will be held on November 8 at the Lion's Club (right behind Ken-Val Co-op) in Quispamsis, and the Carleton Railway will be there!
Posted by Steve Mc at 8:58 AM 1 comment: