To the consternation of nearby residents, Vaughn's Salvage has recently completed a major expansion that has nearly doubled its capacity to receive and prepare various scrap items for shipment on the Carleton Railway. Well-known local politician Hyram Myshrall has hailed the expansion as a sign of the growing local economy, while also taking credit for the realignment of the highway that was necessary in order for the expansion to proceed: 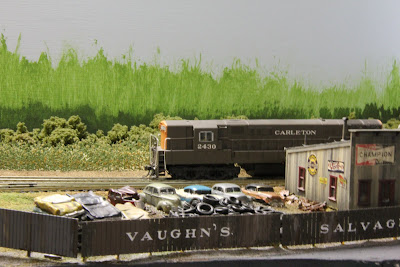 As can be seen in the above photo, the expanded lot is already filling up with junk cars and scrap auto parts. The H66-24 Trainmaster in the background is on the point of the Carleton-York peddler as it makes its way through Wakefield. 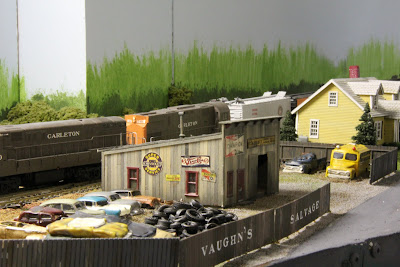 The above view shows the close proximity of nearby homes to the expanded scrapyard.