After a long summer break, the Carleton Railway operated for the first time in four months.  A crew of eleven guys moved a lot of potatoes from Carleton County farms, while having a great time together.  The new passing siding between Pembroke and Wakefield worked well to alleviate the bottlenecks that had become too common in South Newbridge.  Here are a few photos of tonight's activities: 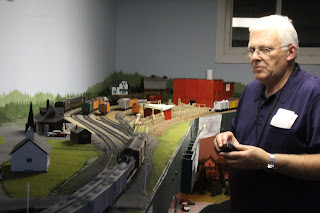 George operated "Extra 2010 East."  In the above photo, George is switching the BQM meat plant in Waterville. Above, Lou, Lawrence and Blake enjoy a short break while other crew members work feverishly to pick up a multitude of potato reefers in Rosedale. 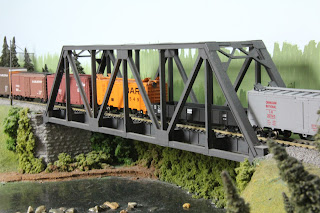 The Carleton-York Peddler, pictured above on the Little Presque Isle River bridge in Waterville, is the daily eastbound way freight.  It was especially busy this evening with an unusual number of set-outs and pick-ups through potato country.  Below, engineer Roy and conductor Doug sort out their switching moves in the South Newbridge yard. 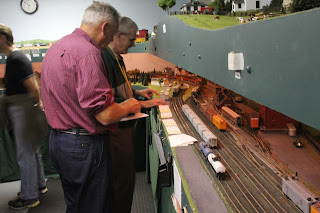 Bob K. did an excellent job as yardmaster in South Newbridge, and Peter and Bob H. worked well together to keep the busy Avondale yard working efficiently.  Thanks guys!