Considerable progress has been made on the Northampton Subdivision. Scenery and ballast has been applied to all but the last three feet of the branch line, which will soon be supplying the sawmill and other industries in the bustling community of Northampton. 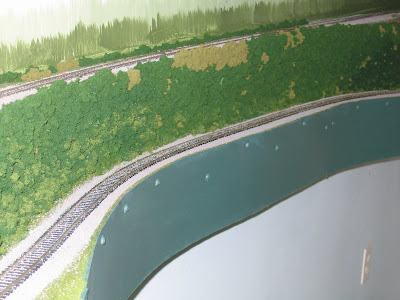 In the photo below, the Northampton Local waits to enter the South Newbridge yard. The change in the track configuration is evident: the yard lead is now on the left, leading to the Willett Fruit warehouse. The Northampton Subdivision (now using the former yard lead) is on the right. The change has also provided an additional siding behind Willett Fruit. 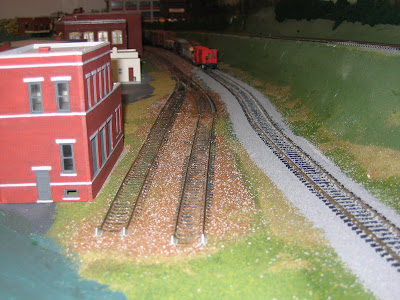 Local business and community leaders have been pressuring the railway to install a small passenger station in the heart of the downtown area now that the new Northampton Subdivision passes right through the business district. They envision shoppers travelling to South Newbridge by train to spend the day in the local shops. A small parcel of land on Mulheron Street adjacent to the railway has been offered by the town for the purpose, but railway management has made no commitment.

Northampton Subdivision nears Completion
My project this week is the long-awaited completion of the Northampton Subdivision. The line will run between South Newbridge and Northampton (in the furnace room)--right at the bottom of the stairs to the basement. I did not want to make the layout any wider at such a busy spot, so I trimmed two-three inches from the mid-level benchwork that carries the mainline up the grade toward Pembroke. There will be a very steep cliff down from the mainline to the new branchline; I haven't decided for sure whether it will be a rock cut, a retaining wall, or lots of ground foam vegitation. I am leaning toward the latter--I think it will make the two tracks seem farther apart. Below is a view of the scene right now. The branchline will follow the very narrow shelf at the base of the plaster/screen wire cliff: 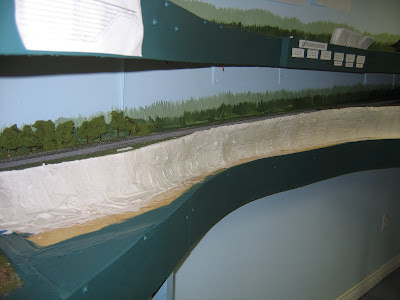 The community of Pembroke poses a problem: I cut away part of the town (all of the structures have been removed), and the only road into the community is now a sudden drop off. That would be fine at the edge of the benchwork, but it is not the edge--it is at the top of a steep cliff above the bracnchline. 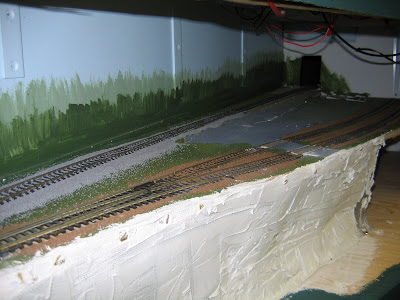 The Northampton branchline should add some unstressful operation to the layout. One local a day will switch Northampton (a sawmill, an apple shipper, and an oil dealer); passenger service may consist of a coach tacked onto the rear of the local.