The past weekend marked two major milestones for the Carleton Railway. The Carleton Railway took part for the first time in the Saint John club's annual show. Four modules depicting the Carleton Railway's Monticello, Maine freight yard and interchange with the BAR were part of the club's modular layout. An Alco S4 was busy all day switching cars in the yard, while an Alco C424 took its turn on the main line. Even a trio of the railway's vintage Geeps--the only GMD units ever owned by the Carleton Railway--were brought out of retirement for use on the Aroostook subdivision. Then on Saturday evening, at a special operating session manned by an enthusiastic crew from Nova Scotia, the first train operated across the newly completed Northampton subdivision. The train travelled under the "Hiram T. Myshrall Overpass" just after the parade that officially opened the community-saving structure. In the photo below, obtained from the News-Advertiser's ace reporter Freda Mulheron, local politician and community hero Hyram Myshrall waves to the grateful residents of Pembroke as he sits in the first car to cross the new bridge at the front of a giant parade in his honour (click on photo to enlarge). 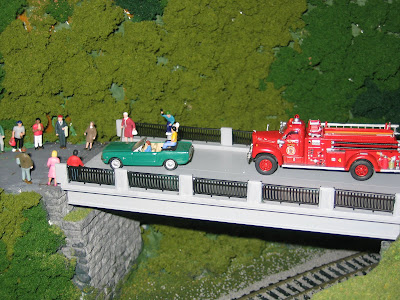