With the first operating session approaching, two new lineside industries near the Rosedale Road are now being served by the Carleton Railway. Mill Pond Farms and a bulk fuel dealer will add to the work of the way freights as they make their way between Waterville and Rosedale. In the photo below, a wayfreight led by two RS3s is approaching the Rosedale Road crossing.

A photographer captured this shot of a test run of three new Alco C630 units in Rosedale, Carleton County, in the fall of 1965. After no Canadian roads purchased the 2750-hp C628, MLW enticed the Carleton Railway to be a trailblazer by purchasing the first two Canadian C-630s (nos. 3005 and 3006). Other Canadian railways (CPR, CNR, PGE) soon followed. Although these three 3000-hp units are unlikely to be in service together, railfans on the Carleton Railway should have opportunity to see these three units often--the CPR has dedicated C630M #4506 to service on the Fast Freight--the daily priority freight train between Fredericton and Montreal--and the Carleton Railway expects that their two new units will see regular service (click on photo to enlarge). 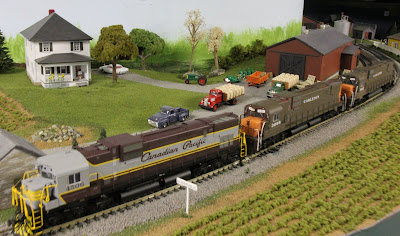 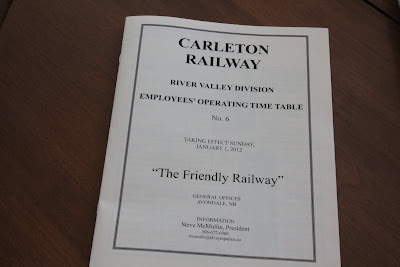 Preparing to resume operating sessions on February 10 involves many things, including the development and production of a new Employee Time Table. The addition of a daily commuter train between Avondale and Fredericton, the purchase of three new 3000-horsepower Alco C-630 units, and the new spur to Grafton have resulted in several adjustments to the daily train schedule. Management has also worked hard to alleviate the bottleneck that occurs when too many trains are in South Newbridge at the same time. The result: Employee Time Table #6.
Posted by Steve Mc at 8:00 AM No comments: