The Carleton Railway is the featured layout in the Fall issue of the NER Coupler.  I am very grateful to the editor for including the layout.  The link to the magazine is:

Getting Carleton County Potatoes to Market!

The Carleton Railway leases additional reefers to keep up with demand (click on picture to expand): 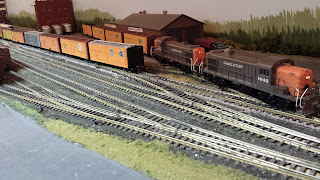 It is a November morning in 1965 and two venerable old RS-3s at the front end of a long string of potato reefers stop to collect four more loaded cars from the potato warehouses in South Newbridge.  Railway management prioritizes potato shipments during the fall season -- this train is running as a second section on the schedule of the "Mail Express" limited passenger train, so those potatoes will get to the U.S. market as fast as possible and in plenty of time for American Thanksgiving.  Note also that management has gone farther afield to locate sufficient rolling stock to meet the seasonal needs of the potato industry; with apple shipments waning along the east coast of the US, a string of available Virginian and Ohio reefers were located and leased by the Carleton Railway for the fall season.  They join the strings of MDT, ART, FGE, and other less common reefers that have traditionally taken thousands of loads of Carleton County potatoes to market each year.  The V & O reefers have no charcoal heaters, but barring unusually cold weather in December their insulation should suffice to keep the potatoes from freezing at least until Christmas. 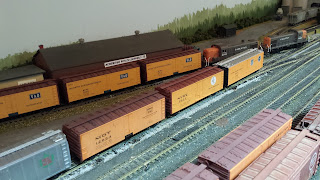 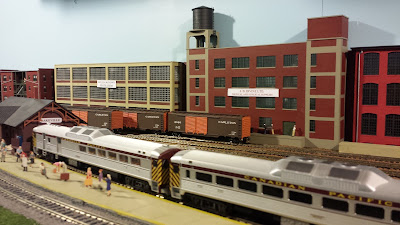 In preparation for the NER/MFMR convention next month, work continues in the old "furnace room" area of the basement.  Above, life is getting quite busy in Lakeville, Carleton County as workers at the various industries prepare to head home after work on the next commuter train.

Below, life in the tiny York County community of Maplewood is much quieter at this time of year.  The potato warehouses are mostly empty now.  A single reefer occupies the track leading to the Maplewood Farms and Cloverdale Road Potato Shippers potato houses. 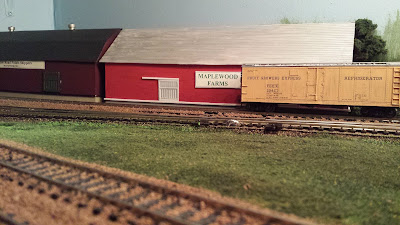 A great day with a PEI crew!

After being idle for far too long, the Carleton Railway came back to life today with a great crew of six people from Prince Edward Island (and a couple of locals who showed up as well!).  Everything worked surprisingly well, and lots of freight and passengers were delivered efficiently.  The newest sections of the layout (Lane's Creek, Lakeville, and Maplewood) were on display for the first time (click on the photos below to enlarge them):

Below, Taylor switches the potato house siding in Rosedale as he adds two loaded potato reefers to the Fast Freight West.  There aren't many potatoes left at this time of year. 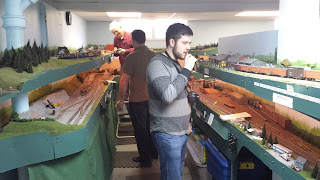 Derwin enjoys a relaxed moment as his train waits to enter the South Newbridge yard. 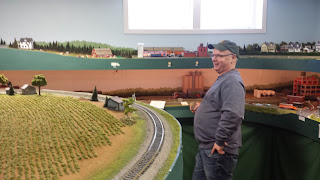 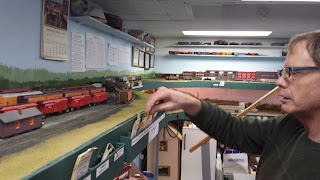 Barry did a great job as South Newbridge yardmaster, while Ray switches the big BQM packing plant in Waterville and Steve arrives in Waterville with the Valley Local. 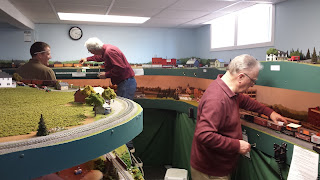 Thanks guys!  It was a great day for the Carleton Railway.
Posted by Steve Mc at 3:36 PM No comments:

The new station has been installed in Lane's Creek, along with potato fields on both sides of the main line (I "planted" 24 rows of potatoes).  Lots of work still to do but progress is being made. 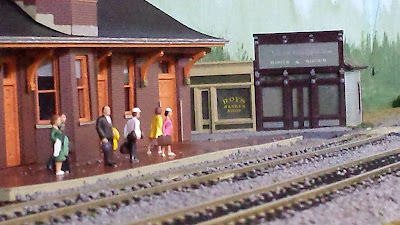 The long shadows show that it is still early on this June 1965 morning in Lakeville.  The Alco S-4 switcher is spotting freight cars that were transferred from the Avondale yard during the overnight shift, while early risers wait on the platform for No. 14, the Capital City Commuter.  Soon they will be reading the morning paper while enjoying a hearty breakfast in the dining car as they make their way across Carleton and northern York counties on their way to Fredericton (click photo to enlarge). 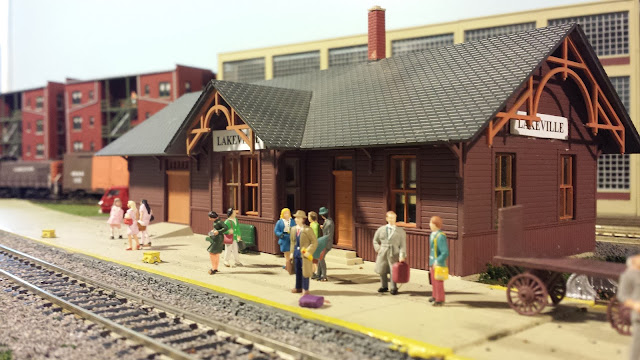 Although not even an “official” train, the Carleton Railway ran a special Saturday passenger consist today from the new station in Lakeville to test the newly laid track and provide a complimentary train ride for residents of the growing Carleton County community.  In addition to the coaches, lounge cars, and dining car, the Carleton Railway’s “Island Park” executive car was tagged on the back of the train so management could inspect the new line.  The new station platform concrete is barely dry and the large industries along the east side of the tracks have just begun receiving supplies.  The new Lakeville Industrial District is located just west of Avondale (on the upper level, directly above Northampton in the old furnace room).  With the track-laying, ballasting, and wiring now complete and basic ground cover installed, many additional details remain to be added but railway operations can now begin.

(Tap the photo below to enlarge)

Operationally, the addition of the new community will affect the railway in at least three ways:
1)  It effectively adds a tenth west-end staging track.  Each day, the Capital City Commuter passenger train will originate from the main station track in Lakeville and return there at the end of each day.  That will free up a staging track in West Avondale.
2)  With several industries and spots for more than 20 freight cars, this industrial switching area will provide additional destinations for a large number of freight cars.
3)  Although I do not anticipate active switching in Lakeville during the regular three-hour operating sessions, the yard will be switched by the Avondale switch crew during the shorter "night shift" sessions that happen between full operating sessions.
I am also considering the possibility of having a small passenger train (probably Budd RDCs) bring workers from South Newbridge and intermediate points to Lakeville each morning with a return trip each evening.