After a long wait, 13 locals descended into the basement on February 10 to operate the Carleton Railway. The crew did an excellent job of moving scores of freight cars and six passenger trains across the layout. Being the first operating session in nearly two years, it is not surprising that a few glitches were discovered (dirty track, low couplers, etc.) but all in all the layout worked well. Of special note is the fact that the Northampton Local East was the first train ever to pick up freight cars on the newly constructed Grafton spur. 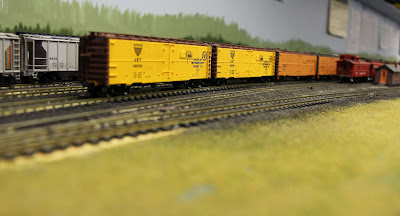 Another loaded meat reefer was left all by itself on a yard track in South Newbridge. The railway will ensure that the cars are kept well refrigerated until they leave on the next freight, but customers at grocery stores in Montreal and in Saint John may have to go without their supply of bacon for a day.

The other strange discovery was that although a tank car loaded with potato starch was picked up from the Hatfield Industries plant in Grafton early in the day, to management's surprise the same loaded tank car had been delivered back to the yard in Grafton at the end of the day. 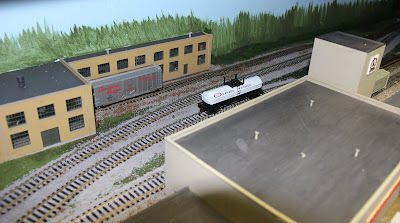 It was great to see the railway in operation after many months of inactivity. Next session: Thursday, March 1.
Posted by Steve Mc at 5:53 AM 6 comments: