A crew of 12 people showed up for a great night of operating on May 25.  In the photo below, George has just guided the Fast Freight East into the station in South Newbridge (led by two big Alco C-630 locos) while Peter works the yard.  Darren and John enjoy some railfanning, while Blake can barely be seen on the right as he moves a passenger train toward Northampton (click to enlarge photo). 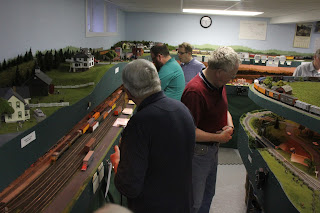 An Evening of Firsts

With twelve proficient crew members skillfully at work, the latest operating session on the Carleton Railway resulted in a number of “firsts” for the railway.  Notably and for the first time, there was not as single misplaced waybill at the end of the operating session—a clear sign of how adept the yardmasters and train crews have become at ensuring that all freight is delivered quickly and accurately.  As management checked each destination after the session had ended, all car cards were found to have been placed exactly where they were supposed to be.  The crew is to be congratulated on a job well done!

A second “first” was the simultaneous operation of two switch locomotives in the Avondale Yard, thus doubling the crew’s efficiency.  With yardmaster Bruce at the controls of locomotive 1025 (an Alco S4), Assistant yardmaster Bill was spotting cars at local industries using locomotive 1503 (an old Fairbanks-Morse H15-44 still lettered for the Avondale Terminal Railway).  The ATR, originally owned jointly with the CNR, is now a wholly owned subsidiary of the Carleton Railway (although CN has retained trackage rights to reach industries in Avondale).

A reminder of another “first” was the return of one of the railway’s original crew members.  Darren, who recently moved back to NB from BC, had participated in a three-person operating session on the Carleton Railway in 2002-2003 when it was DC powered and did not include any of the central peninsula.  In those earliest days of the layout, no more than two trains at a time could be operated from staging just east of South Newbridge to staging just west of , and scenery was very basic.  The only towns served by the railway were East Newbridge, South Newbridge, Pembroke, and (a passing siding on a steep grade in the furnace room allowed trains to meet between Pembroke and ).

The final first of the evening was the first passenger train ever to arrive in !  The workers at Patterson’s Mill were amazed to see Extra West 71, an Island Central passenger train, creeping past the millyard toward the millpond loaded with the movers and shakers from the .  The locals thought it must be a mistake, and sure enough—it was.  It seems that Doug, the engineer who originally brought the train and its passengers from to the posh resort at Nortondale, was nowhere to be found so another crew member volunteered to take the train to be turned in the yard in Grafton while the passengers enjoyed an afternoon of shopping in .  The train neither stopped at the station in downtown nor did it take the spur into Grafton.  When management noticed the train entering and mentioned that the train’s orders clearly directed the train to be turned in Grafton, crew member Bob mentioned something about “not reading train orders.”  Now that the locals have photos of a passenger train in town, you can be sure they will be lobbying for improved service.  Currently, is served by a daily mixed local—the heavyweight coach “Muniac” provides passengers with connections in South Newbridge as well as daily service to the towns of Nortondale and . 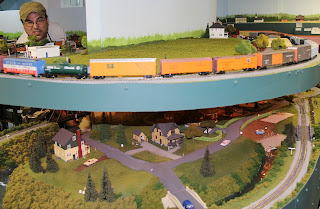 Though not a first, the 30-car westbound “Valley Local” also deserves special mention.  The train typically has about 15 cars when it leaves South Newbridge but the bustling economy resulted in a train twice that length when crew members Lawrence and Norm were ready to leave town.  Powered by two 2400-HP units (H24-66 #2431 and C424 #2403), the train was carefully pushed up the 2.9% grade to Pembroke by South Newbridge yardmaster Peter with Alco S4 #1023, from where the train continued on its way to Avondale.

These regularly scheduled operating sessions are really helping me to identify any problem areas on the railway.  I have a list of things to be fixed before the next session.  Each session helps move the layout closer to being derailment free.

Sincere thanks to the excellent crew for a very enjoyable evening.  The next session (and last scheduled session until fall) will be on Friday, June 15.

Now that scheduled operating sessions have resumed on the Carleton Railway, I am noticing things that need to be fixed or improved on the layout.  The community of Northampton has been somewhat neglected; because it is in the furnace room, it is out of sight most of the time, but during the last operating session I watched in frustration as a string of flat cars derailed and I also realized that nothing had been done to make the scenery look "finished."  Since the last session, after investigating the track work, I have made some improvements to the track, including the addition of a guard rail on a troublesome crossover.  I also discovered that two of the flat cars needed some work, and repaired them.  Hopefully the derailments will be fewer at the next session.

The next project was to make Patterson's Mill in Northampton look like it is actually in business.  The sawdust burner was installed, a large sign was added, roads and level crossings now make the mill accessible to vehicles in the outside world, and the beginnings of a lumber yard (where the ground is covered with sawdust) suggest that the business is prospering.   In the photo below, a truckload of logs has just crossed the tracks en route to the millpond (click on photos to expand). 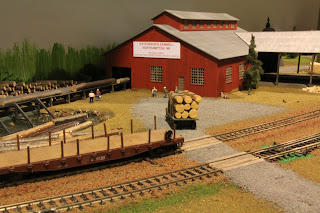 In the scene below, stacks of lumber await shipment by rail to customers.  That is the "Dukeshire's Apples" warehouse barely visible in the background behind the box car.

The Northampton Beverage Company is new to the community.  Its main product is Frostie Root Beer (when I was a child growing up in Carleton County in the 60s, the Frostie plant was just a short distance from our house). 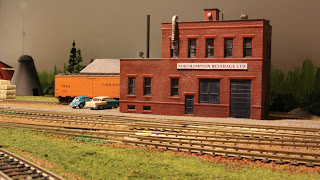 Improvements are also underway on the six Montecello, Maine modules--they will be travelling to the MFMR convention in Halifax in early June.

The next Carleton Railway operating session is scheduled for Friday, May 25.
Posted by Steve Mc at 10:02 AM 1 comment:

With the skill and expertise that always characterizes the Carleton Railway's crew, the May 4 operating session saw fourteen scheduled trains move freight and passengers, along with an extra freight that worked for most of the morning switching cars in Waterville, and an extra passenger train that caught everyone's attention. 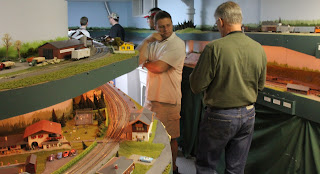 In the above photo, in the distance the westbound Valley Local (Lawrence and Norm) is picking up a couple of loaded reefers from the potato house beside the Rosedale Road crossing.  The Carleton-York Peddler (Bill and Bob B.) has completed its switching in Waterville and waits in the siding.  Matt enjoys a few minutes of railfanning before heading out on the Northampton local. 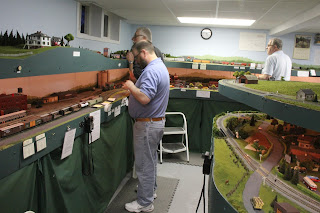 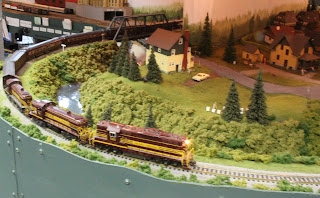 The highlight of the evening was the inaugural run of "Extra 71 West" -- an Island Central Railway passenger train filled with well-healed business leaders from the foggy city seeking a weekend escape at the Carleton Railway's posh resort in Nortondale.  With engineer Doug Devine at the throttle, the ICR's dilapidated Osgood-Bradley coaches were pulled by a trio of aging locos that limped into the station at Nortondale at mid-day.