New Signal Bridge in Avondale
About a year ago I made the decision to begin the process of adding operational signals to the Carleton Railway.  Progress has been slow (life has been busy!).  The signal masts are now in place, along with some relay cabinets, and I have been reading up on JMRI--I also attended several clinics on signalling at last year's NMRA national convention.  A major problem was at the east end of the Avondale yard.  The two vertical signal masts that had been positioned could not be seen well from the aisle and really didn't seem to "look" right.

This evening I installed an NJ International two-track signal bridge.  I still have to add the signal heads and the wiring, but it looks much better and the signals will be more visible from the aisle.  Here are a couple of views of the new signal bridge (click on the photos to enlarge them): 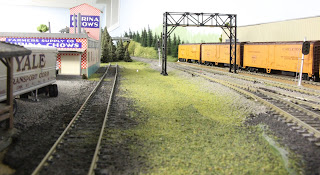 You can see in the photos that the vertical signals just don't look right here. 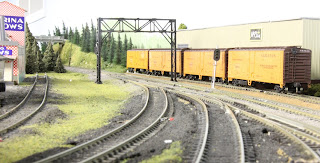 I am obviously not going to have the signal system up and running for a while, but I am hoping that with help from other club members I will make some progress in the months ahead.

Tonight was the Carleton Railway's last operating session until fall, and a great turnout of 13 enthusiastic crew members made for a busy and productive evening.  All trains completed their runs and a lot of freight was delivered.  There were a few minor incidents--two carloads of beef cattle were mistakenly left on a yard track in Waterville, but the Newbridge Turn crew (Bob B. and George) spotted them at the BQM packing plant later in the day.  A load of cull potatoes was missed at Rosedale, but its market value is pretty low anyway. Management will make a thorough check to see how careful the crew was in making sure that each carload got to its intended destination.

Bruce was back at the big Avondale yard as yardmaster, with Bob B working as Assistant yardmaster.  They were a great team (click on the photos to enlarge them). 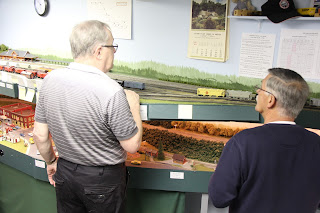 In the photo below, the potatoes are off to a good start.  Peter was hard at work as South Newbridge yardmaster, while Doug guided the eastbound Capital City Commuter (passenger train) into the station.  Mike was part of a three-man crew on the Valley Local tonight--thanks to Willy and Matthew for their help. 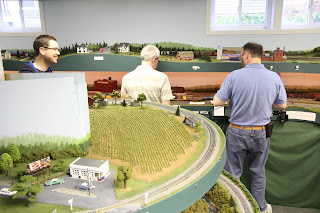 Ian jumped in with both feet during his first visit to the Carleton Railway, serving as the crew for Extra 2010 (which serves as the Waterville yard switcher).  Here he switches the BQM packing plant while Barry guides the Fast Freight East through town. 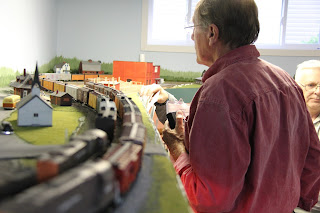 At about noon (railway time) the yard at South Newbridge was full--lots of freight is transferred here between the two branchlines and the Avondale Subdivision.  By the end of the evening, the yard was nearly empty thanks to the efficiency of the crew. 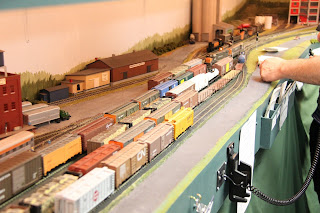 During a quiet moment, the president of a rival railway took time to spy--er--observe the industries in Grafton that are served by the Carleton Railway. 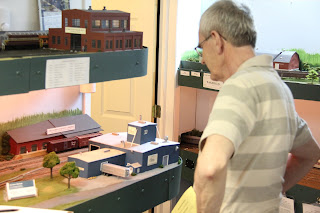 Thanks so much to everyone who has been able to participate in the operating sessions this past year.  You are the people who make it all worthwhile.  I look forward to another enjoyable year of operations beginning in September.
Posted by Steve Mc at 7:27 PM No comments: