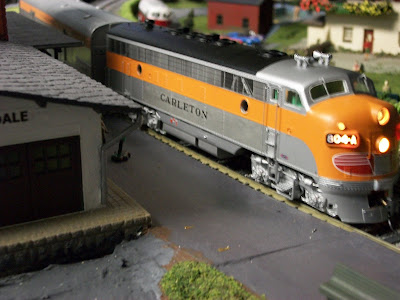 In preparation for the introduction of a second daily passenger train, the Carleton Railway has been purchasing new equipment. This newly painted and lettered locomotive was added to the railway's fleet of diesel locomotives during December. 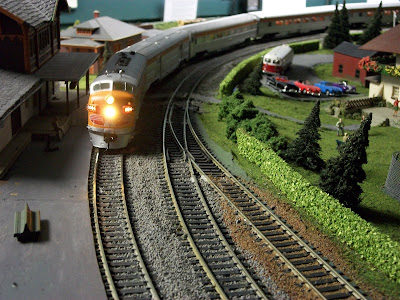 The newest Carleton Railway locomotive, an FP7 complete with QSI sound, pulls a shiny consist of streamline passenger cars as it coasts to a stop alongside the picturesque Nortondale Station. Directly across the tracks from the station is the Carleton Railway's famous "Nortondale European Resort." Railway management authorized the purchase of new equipment in preparation for the introduction of a daily passenger and mail service to Montreal, with the expectation that the new service will do very well in competition with the ICR's Atlantic.
Posted by Steve Mc at 1:04 PM 4 comments: