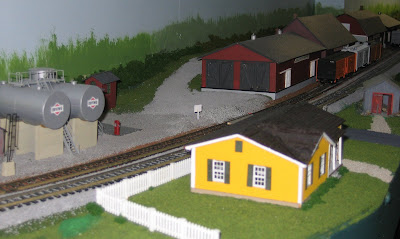 A new house in Rosedale provides a hint that there are people living in the community. I put together a "Branchline" house kit and added it to the front of the layout, along with a new "private crossing" that provides road access to the Irving Bulk plant and the string of potato houses.
Posted by Steve Mc at 5:36 PM 1 comment:

Here are a couple more photos of the Moncton operating crew on Saturday, December 13. Below, Milne is operating the Carleton-York peddler as it crosses the Rosedale Road between Waterville and Rosedale. Milne was especially adept at the prototypical use of the locomotive's horn at the highway crossings. 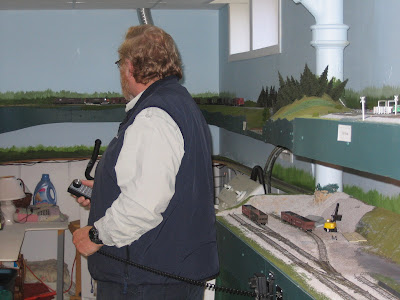 In the photo below, while yardmaster Mike finishes making up the "Newbridge Turn", Jim waits to take the train out of the Avondale yard. 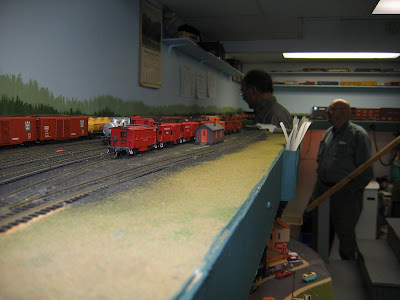 Thanks guys for an enjoyable day.

Although operating sessions have been rare lately, a group of five Monctonians operated a busy schedule over the Carleton Railway on Saturday, December 13. One of the highlights of the day was the arrival of #24 (the Northampton mixed train) at the end of the day. The unexpectedly long train, with engineer Milne and brakeman Murray, brought five loads of logs to Patterson's mill, a tank car for the Esso bulk plant, a hopper load of ballast to be used by the track gang, and several empty freight cars for loading at the local industries. At the end of the train was the rejuvenated heavyweight coach Muniac filled with workers for the mill. 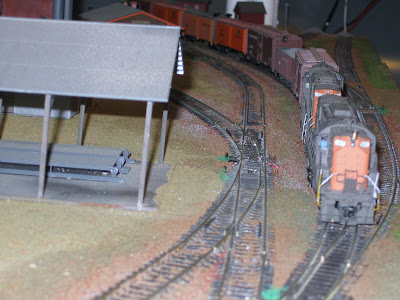 The above photo shows RSD-15s 2416 and 2417 at the front of the Northampton mixed train as it pulled into the bustling community. Although the yard tracks resemble a switching puzzle, the crew ably spotted the various freight cars at local industries in short order. 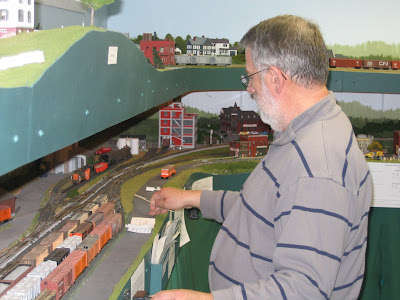 Above, John works as yardmaster in South Newbridge. As always, South Newbridge was a very busy spot with a lot of cars to deliver to local industries. 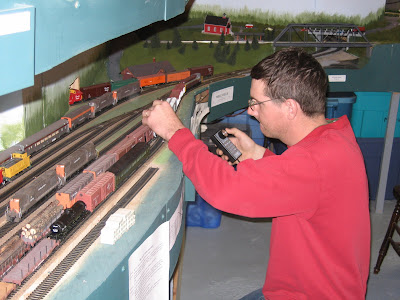 Murray is the engineer on today's Fast Freight West. In the above photo, he is switching cars in the Millville Yard before departing toward Avondale. This was Murray's first visit to the Carleton Railway.
Although there have been few operating sessions this fall, the Carleton Railway has been a busy place: I have been troubleshooting some of the track trouble spots, working to improve the reliability of the freight car fleet, adding more scenic details, and making changes to the timetable. I still have a few projects to complete, so regularly scheduled operating sessions won't begin again until March 2009 (celebrating the third anniversary of operations on the layout).