The annual train show of the Saint John Society of Model Railroaders was a great success this year. The Carleton Railway added two more modules (for a total of six) to better depict the busy commercial town of Monticello, Maine -- just across the border from Bloomfield, NB. The photos below show some of the progress:

The agricultural industry is key to the success of Monticello's downtown area. Whether at the MPG garage on Main Street or at the general store just across US Route 1, it is the farming economy that determines whether or not it is a good year. 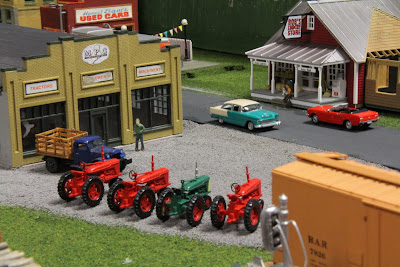 Big potato deals are negotiated and finalized in these sturdy old office buildings on Monticello's Main Street. Both the Carleton Railway and the Bangor and Aroostook will ship thousands of carloads of potatoes through Monticello this year (1965). 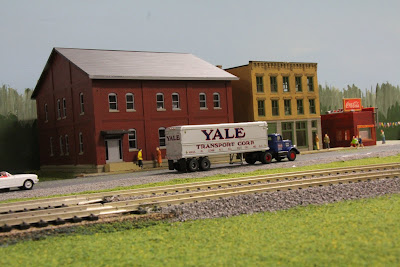 Thanks to everyone who attended today's show!
Posted by Steve Mc at 4:10 PM 1 comment:

The Carleton Railway will be participating in the annual Saint John train show on Saturday at the Lion's Club in Quispamsis (behind the Ken-Val Co-op). The railway will be represented by six modules portraying the busy junction between the Carleton Railway and the Bangor and Aroostook Railroad in Monticello, Maine. Two of the modules have been newly constructed this year and will be included in the show for the first time; I have added many details and improvements to the other four modules. Information about the show is available on the club wesite: http://sites.google.com/site/sjfallshow/

I hope to see you on Saturday!
Posted by Steve Mc at 7:46 AM No comments: