With the final op session until fall scheduled for this Friday evening, I have added a few details to the layout.  In Northampton, an old wooden boxcar has been placed beside the Northampton Beverage plant and is being used for storage of glass bottles and bottle caps.  I remember a similar wooden boxcar for storage being located near the CNR station near my home in Woodstock during the 1960s (click on photos to enlarge them): 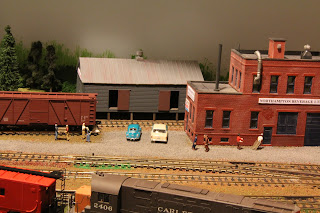 The sawmill in Northampton is also looking much busier these days, with a full crew of workers, freshly-sawn lumber, and trailers being loaded: 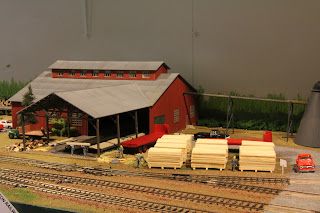 Folks in Wakefield were at first relieved to hear that Vaughn (of Vaughn's Salvage yard) had purchased the cape cod house right next to his business.  Neighbours hoped it would lead to some clean up at the business.   Instead, it appears that Vaughn's plan is to have a permanent yard sale in front of his new home: 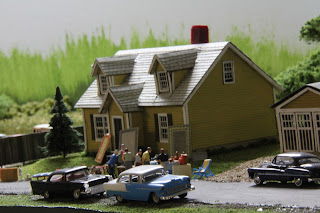 The operating session begins at 7 p.m. on Friday evening (June 15).  For the first time ever, train # 22 (the Fast Freight East) will arrive in Avondale as two sections, due mainly to the number of freight cars being used to haul farm chemicals for the potato farmers.  Even ice-bunker reefers, which would otherwise be idle at this time of year, have been called into service to deliver fertilizer.  It should be a busy evening.
Posted by Steve Mc at 11:45 AM No comments:

I had a great weekend at the Maritime Federation of Model Railroaders (MFMR) convention in Halifax this weekend.  Four members of our SJSMR club took our modules to be included as part of the public train show on Saturday.  The Carleton Railway was represented by my six modules representing Monticello, Maine.  Since our club's show last November, I have done a considerable amount of work on the two outside modules. 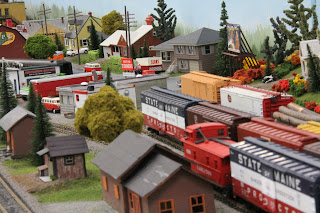 In the photo above, a train has just entered the Monticello yard.  The busy commercial district can be seen in the background. 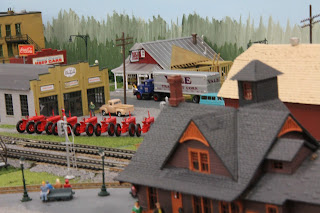 Above, the local farm supply dealer is hoping for good sales this spring--the lot is crowded with the latest tractor models.  Below, a residential area has been added across the tracks from the Main Street. 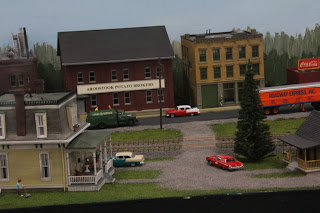 The weekend concluded with some visits to Halifax-area layouts and a brief operating session at Doug's White River Southern.  Thanks to everyone in the Halifax club for their work in making a good convention.
Posted by Steve Mc at 4:07 PM 1 comment: